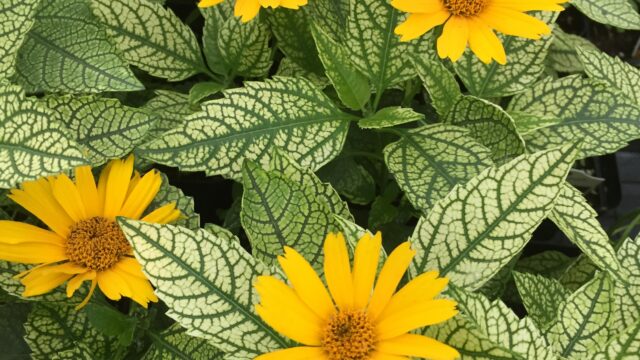 In addition to mums, pansies, ornamental cabbage and kale, many hardy perennials and shrubs provide late-season food for pollinators, songbirds, and other wildlife while also adding colorful blooms and berries. Here are some of our favorites… 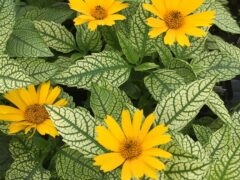 'Summer Sun' is a long-blooming hardy perennial that produces yellow, semi-double daisy flowers with deep orange-yellow center disks all summer long. An excellent tall selection for the back of the border that looks fresh and happy even in the hottest weather, it will attract pollinators like crazy. Great for cutting.

‘Sunstruck’ grows with striking variegated foliage. A most attractive border plant even when not in flower. Covered with the same cheery, bright yellow daisies from summer thru fall. 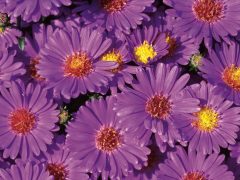 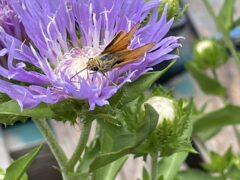 Native to wetlands, bottomlands, savannas, and ditches along the coastal plain from North Carolina to Florida to Louisiana, Stokesia is evergreen in the south. It features fluffy, cornflower-like, violet-blue flowers  2 1/2” across from summer through fall. Easily grown in average, medium moisture, well-drained soil in full sun. Plants tolerate filtered sunlight but prefer full sun. Surprisingly good drought and heat tolerance, plants will not tolerate poorly drained soil in winter. 'Mel's Blue' was discovered in 2007 as a chance mutation of an unnamed variety of Stokesia laevis. 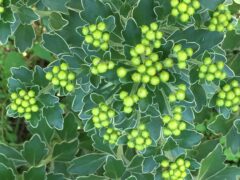 Superb, white-edged foliage with small, yellow flowers in late fall. An exceptional plant with striking foliage native to central and eastern Asia. It is a mound-forming, rhizomatous perennial noted for its striking variegated foliage in spring and summer. It typically forms a dense foliage mound to 18-24” tall that spreads over time by rhizomes to as much as 36” wide. Undersides of the leaves are silvery. Some gardeners grow this plant primarily for its foliage. Autumn bloom features small, button-like, yellow flower clusters. 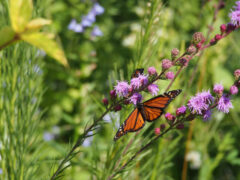 A fantastic nectar plant for Monarch butterflies and many other pollinators including hummingbirds. The fall seeds are popular with Goldfinches. Grows up to 5' tall when planted in rich soils, in which case you may want to stake the plants. The color leans magenta, and tufted blossoms often appear all at once along the stems, lasting for many weeks in late summer. NATIVE TO THE CENTRAL UNITED STATES FROM TEXAS TO CANADA 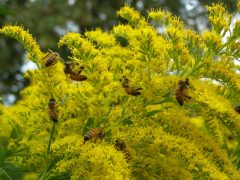 This native selection is a compact, upright plant growing only 18″ tall and produce dense, golden-yellow flower plumes in late summer and fall. Zone 4 NATIVE TO MOST OF NORTH AMERICA MINUS THE SOUTHEAST. 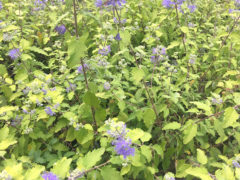 This fragrant late summer bloomer sends up aromatic, whorled, blue-flowering spikes over striking bright chartruese foliage. A wonderful contrast plant that is adaptable to difficult sites and beautiful even when not in bloom. Root hardy to USDA zone 5 will die back to the ground in cold weather. An important late season pollinator nectar plant. ‘Worcester Gold’ is a cultivar with striking, bright golden-yellow foliage. 'Blue Myth' is a slightly more compact cultivar topping out at about 24-30" with dark blue flowers. ‘Dark Knight’ offers a reliable 24" height and spread. 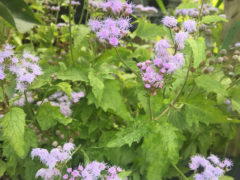 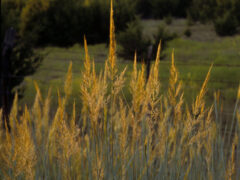 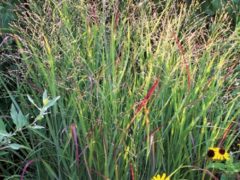 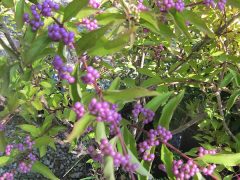 A rounded, deciduous shrub with upright-arching branches. The best ornamental feature of this shrub is its showy fall display of purple berry clusters. Small, pink to white flowers bloom in June and are not particularly showy, but are followed by large clusters of bright, glossy, violet-purple fruit that ripens in late summer and persist through October. Fruit is attractive to birds. NATIVE TO THE SOUTHEASTERN U.S. FROM KANSAS TO TEXAS AND EAST TO THE ATLANTIC. 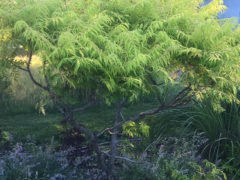 Grows in any well-drained soil in full sun to part shade. Tolerant of urban conditions. Forms thickets by self-seeding and root suckering.  Leaves turn shades of yellow/orange/red in fall. Tiny flowers bloom in cone-shaped panicles in late spring to early summer. Female flowers produce showy pyramidal fruiting clusters up to 8” long, each containing numerous hairy, berry-like drupes which ripen bright red in autumn, and turn dark red as they persist through much of the winter. Fruit is attractive to wildlife. Rhus typhina 'Tiger Eye' is a selection with more controlled growth habit and bright yellow-green foliage that makes a striking contrast in any landscape. NATIVE TO THE EASTERN HALF OF THE U.S. 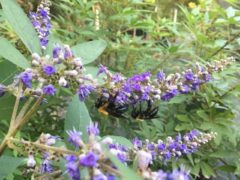 Grown in as a vase-shaped multi-trunk shrub to 10-15' tall or trained as a single trunk tree to 20' tall. Features aromatic gray-green leaves and tiny, fragrant, lavender blooms in loose 12" panicles in mid to late summer. Flowers are extremely attractive to butterflies and other pollinators! Native to Mediterranean and Asia. 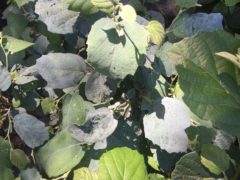 White honey-scented flowers at branch tips on a mounded shrub featuring two-tone blue-green foliage in spring followed in fall with stunning fall colors of red, orange and yellow. Provides unique color to the landscape as a foundation plant and mixed borders. Best bloom and color when planted with more sun, but adapts to partial shade. Deciduous. 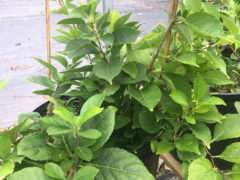 An open, upright, deciduous shrub that typically grows 3-6’ tall. Autumn berries and purple-red foliage color. Native to swamps and low woodlands from Newfoundland to Minnesota south to Tennessee and South Carolina. Var. elata is more vigorous, slightly larger but less suckering, with longer leaves, larger flowers and larger fruit, and is thusly considered to be a superior landscaping shrub in comparison to the species.