Prehistoric pepper plant remains show the plants existed and were cultivated in Central and South America. Columbus brought them to Europe in 1493, where they became very popular. The only pepper known at the time was the black and white spice we keep in our shakers. Noting that the fruit was “hotter than the pepper of the Caucasus,” the European name “pepper” stuck. Except for Tabasco and habanero, peppers belong to the Capsicum annuum group of the Capsicum species.

The Scoville scale is a measurement of the spiciness of peppers and other spicy foods, as recorded in Scoville Heat Units. The scale is named after its creator, American pharmacist Wilbur Scoville, whose 1912 method is known as the Scoville organoleptic test. It ranges from 0 (the least spicy, including bell and banana peppers) to the almost inedible 2,200,000 (ghost peppers). Jalapénos come in at about 5,000-15,000, and chiltepins about 100,000–350,000.

All plants are grown in 3.25″ pots for $3.75 each. Flats of 18 mixed veggies are discounted 10%. Plants are grown with organic potting mix and fertilizer.

Email amyalbright@vinlandvalleynursery.com or call in (785.594.2966) your shopping list and we will collect your items for you to pick up, or arrange delivery! We are open for business with safety measures in place and open-air shopping. We are also providing maintenance and landscape installation. Our crews are taking special precautions to stay safe as they continue to get the job done. 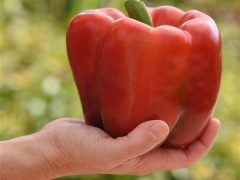 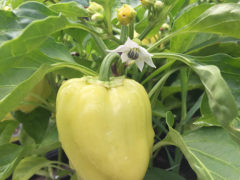 The largest of the chile peppers, with medium-hot fruits measuring 10 to 12” long. The … Continued 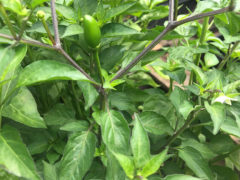 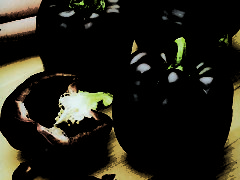 A medium-large, very smooth 3 and 4 lobed fruits mature from green to a very … Continued

Imported from Italy with 8 to 10” long fruits. Ripens to a gorgeous red at … Continued 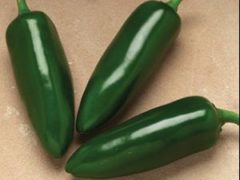 Considered by chefs to be the best for cooking fish and shellfish. 18 to 24” … Continued 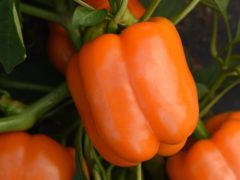 Among the very hottest ever! 1,000 times hotter than Jalapeno. Native to Yucatan, lantern-shaped, 1” … Continued 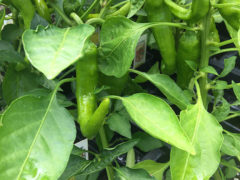