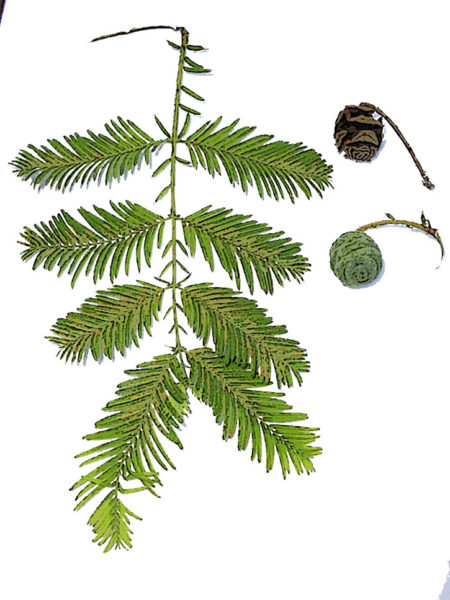 Fast growing deciduous conifer grows 75-100’ or taller and 15-25’ wide with a pyramidal shape. Considered a “living fossil” dating from prehistoric times and thought to be extinct until discovered in China in 1941. Several years later seed was collected and distributed amongst botanic gardens in the United States and Europe for cultivation. Grows in boggy sites but does equally well in drier locations.

From fossil records, dawn redwood is known to have existed as many as 50,000,000 years ago. However, it was not until 1941 that it was first discovered growing in the wild near the town of Modaoqi, China by Chinese forester, T. Kan. Seeds collected from the original site were made available to the Missouri Botanical Garden in 1947. Seedlings grown therefrom were planted in front of the Lehmann Building at MBG in 1952 where they have now developed into large mature trees over 70’.