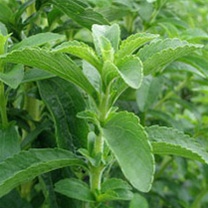 Commonly called sweetleaf, this herbal alternative to sugar is up to 300 times sweeter. Use fresh or dried to sweeten most anything. Transplant this South/Central American rainforest plant outdoors after low temperatures are above 45°. Can be wintered in a container indoors.

FDA approved Stevia as a food sweetener in 2009.

Stevia has been the subject of search and seizures, trade complaints and embargoes on importation, and has been handled at times by the FDA as if it were an illegal drug. With the passage of the Dietary Supplement Health and Education Act, Stevia could be sold legally in the United States, but only as a dietary supplement until 2009. Though it could be found in drinks, teas and other items, all were labeled as “dietary supplements” and not as “sweeteners”, nor could it even be referred to as “sweet.” Some sources cite health concerns when Stevia is consumed in large quanitities, and it is not allowed in foods sold in Canada or Europe, though it is widely used in Asia.