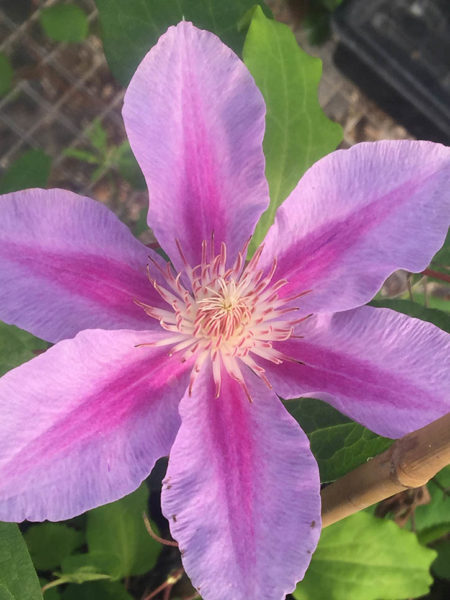 6–8″ mauve-pink flowers with deep pink bars put on a copius display in early summer, with repeat bloom later in the season. A compact grower and very showy. ‘Bees Jubilee’ was raised in 1958 to commemorate the 25th anniversary of the nursery Bees of Chester. Holder of the Royal Horticultural Society’s prestigious Award of Garden Merit (AGM), this midcentury cultivar still holds its own among current varieties. It produces mauve-pink flowers with a deeper central bar in May and June, and then again in September

Some say Clematis like having their head in the sun and their feet in the shade. While they really don’t mind if if their roots are exposed to sun, what they don’t like is dry soil and extreme heat. Soil constantly exposed to full sun will likely dry out faster and be hotter than soil that is shaded. So if you keep your clematis well watered and mulched you can grow clematis with their root zone in full sun.

Group A // Bloom early in the year and can be pruned to keep them within their allotted space, or to remove dead and unsightly foliage but only right after flowering. If are pruned late in the season, or before they flower in the year, flower buds will be lost. Some of the more commonly found representatives of this group include the Montanas, which are extremely vigourous in USDA zones 5 and warmer, and varieties of C. alpina and C. macropetala. These clematis will also develop into very large specimen plants over time. All of the Group A clematis bloom on growth made the previous year.

Group B  //  Plants bloom first on old wood and then again on new growth. Prune lightly in early spring to shape if desired and then prune after bloom if desired. You really can’t screw up with this group!

Group C // Summer blooming varieties inclusing viticellas, Jackmanii, texensis, herbaceous species such as integrifolia and recta, and the late bloomers like sweet autumn clematis (C. terniflora) and orientalis types. This group blooms on new wood produced in the current year and should be pruned back severely every year in late winter, when dormant to about 12″ about soil level. Leave at least two pairs of buds (4) on each stem of the plant. This is a very fast growing group and will reach their full height before blooming every summer. Fail to prune will cause leggy vines devoid of foliage and blooms. 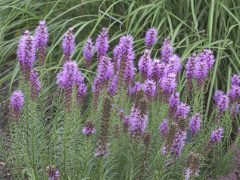 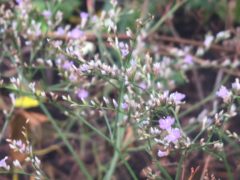 One of our favorite perennials, this hardy, heat and drought tolerant perennial produces airy sprays … Continued 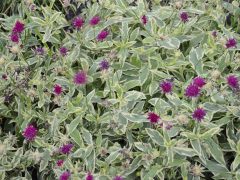