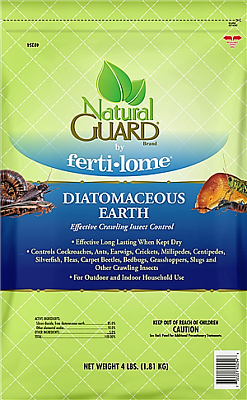 This natural contact insecticide works by causing abrasions on insects as they come in contact with it, resulting in loss of body fluids and dehydration. Digestible by Earthworms, thus causing them no harm.

Controls roaches, ants, earwigs,  and other hard-shelled insects. We especially like it for controlling squash bugs.

Diatomaceous Earth (DE) is made from the fossilized remains of tiny, aquatic organisms called diatoms. Their skeletons are made of a natural substance called silica—which makes up 26% of the Earth’s crust by weight.

It is often recommended to gardeners to sprinkle DE around their plants to deter pests. Diatomaceous earth as an insecticide is not poisonous, rather slugs and snails do not like to crawl over DE because the silica skeletons are very sharp—like tiny pieces of broken glass. When slugs or snails crawl over DE, the result is cuts and abrasions to their soft bodies, loss of fluid and eventual dehydration. This process works on other soft bodied insects, too, including caterpillars and aphids, and on those with hard shells too such as beetles, fleas, cockroaches, and even bed bugs.

Sprinkle bands of it around the plants you are trying to protect or for another level of pest control you can dust the leaves of a plant, for example, potatoes that are infested with potato beetle larvae. DE works best when dry, even morning dew will lessen its effectiveness, so you will have to reapply after it rains. According to the Old Farmers Almanac, DE does not harm the soil since it is made from silica, the same as sand and many rocks. It does not break down when exposed to sun. Rain can wash it into local water sources but it is non-toxic to fish and other aquatic life. It is not harmful to birds or other wildlife. It has been added to livestock feed for years.